Team Gauteng dominated the South African School Sports Championships walking away with no fewer than 207 medals of the 369 up for grabs at the country’s most prestigious schools sport event.

This event, hosted in Pretoria from the 10-16 December, included 14 sports codes and 4 indigenous games. 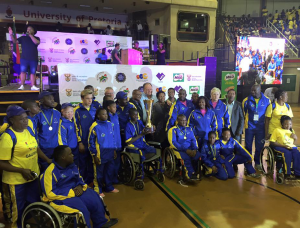 Team Gauteng dominated from the start and ended the games with 109 gold medals among its tally. KwaZulu-Natal gave them light competition coming in second place with 36 gold medals and a total of 102 medals; Western Cape followed in third place with a total of 97 medals with 24 of them being gold.

Limpopo with 37 medals, North West with 32 and Northern Cape with one silver made up the rest of the table.

The Gauteng Sport Confederation (GSC) was hands on with the games and would continue to provide logistical support going forward. The GSC supports Team Gauteng at these games by volunteering staff as a part of the management team.

“Not only was the event extremely well managed but for Team Gauteng to dominate to this extent means that we are doing something right in the province,” said GSC secretary general Yaseen Lombard. “This success is a testament to the countless hours spent by schools, teachers and volunteers to prepare these teams.”

Lombard said that sport was doing well in the province, but that plenty more still had to be done. “Today is a proud day for sports development in Gauteng and we are immensely proud to be a part of this development. We, however, are well aware that much more development needs to take place in the province and we are prepared for that challenge.”

In addition, the netball team from Afrikaanse Hoër Meisieskool in Pretoria walked away with the prize for the best team at the championships, earning their school a cool R20,000 from sponsor Milo.

“We are happy that women sport is on the rise and getting more recognition each year. This is a wonderful opportunity for aspiring netball players who would like to play for the Proteas one day,” said Lombard.

The SA School Sport National Championships is the culmination of the Minister of Sport and Recreation, Fikile Mbalula’s Sports Plan which seeks to ensure maximum access to sport and recreation and physical education in every school in South Africa.